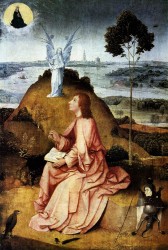 According to Fraenger Bosch’s St. John on Patmos panel (Berlin) was strongly influenced by an engraving with the same subject by Martin Schongauer. But Bosch’s approach was less ‘geometrical and rational’ than that of his example.

Because the little devil in the bottom right corner is wearing the headdress of a canon the panel is said to be directed against the Church and so it belongs to the mental world of the Free Spirit sect, about which Fraenger has written in earlier publications. The figure of St. John is said to be a portrait of the Supreme Master. The panel is not the wing of a triptych (as has been claimed by some authors) but an Umwendtafel (a ‘reversal panel’), a genre that was designed by the Supreme Master himself. The painting (and the Thousand-Year Reign, Fraenger’s title for the Garden of Delights) is based on the apocalyptic prophecies of the Calabrese abbot Joachim of Fiore.

The Passion scenes on the backside of the panel, which has been painted in grisaille, is meant as an introduction to the frontside and is based on the three phases of Joachim of Fiore’s religious history of the world: the eras of the Father, the Son and the Holy Spirit.

Fraenger also points out that the book in St. John’s lap is written in Hebrew (because St. John is writing from right to left), which is all the more remarkable because St. John’s Book of Revelations has come down to us in Greek. Fraenger concludes from this that the patron of the painting was a Jew, be it a christened Jew. In a sixteenth-century ’s-Hertogenbosch chronicle a certain Jakob van Aelmangiën is mentioned, a Jew with German roots who was baptised in ’s-Hertogenbosch in 1496, in the presence of Philip the Fair. Some time later he abandoned the Christian faith again. In Fraenger’s opinion this event was something very special (which is not correct: in Bosch’s days more than one Jew was baptised, also in the presence of important persons, and their abandoning the Christian faith wasn’t exceptional either). Fraenger concludes that this Jakob van Aelmangiën (literally: James of Germany) was the Supreme Master of the Free Spirit sect and Bosch’s patron.