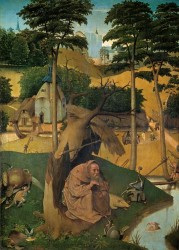 In this article Fraenger focuses on the Prado Temptation of St Anthony panel, which is sometimes attributed to Bosch. He points out the idyllic landscape, which reminds of Geertgen tot Sint-Jans. The little devils who are tempting Anthony here, are funny, pygmy-like creatures that could not harm the saint in any way.

According to Fraenger the real temptation lies within Anthony himself and boils down to a dangerous excrescence of being lost in contemplation, a spiritual activity that was also frequently exercized by the meditating pupils of the sect of the Free Spirit.

During contemplation a person so to say hypnothizes himself, giving free rein to all sorts of unconscious, mostly sexually-inclined thoughts. Anthony – who is staring in front of him in the panel – is in such a ‘trance’ and now he has to try to suppress his bad ego. Referring to the theories of C.G. Jung Fraenger calls this bad ego Anthony’s ‘alter ego’. He recognizes it in the face with the clawing hand that surfaces in front of Anthony from the water.