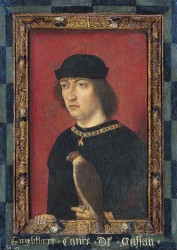 In 1517 the Garden of Delights was signalled in the Brussels palace of Henry III of Nassau. Because Bosch worked for patrons more than once, it is believed that Henry or his uncle and predecessor Engelbert II of Nassau (who died in 1504) has commissioned the triptych. Both noblemen were known as great lovers of art.

Because most art historians situate Bosch’s triptych around 1500, the most likely candidate for the patronage of the Garden is Engelbert. He owned ‘houses’ in Brussels, Breda, Diest and Malines (Mechelen) and was quite familiar with the city of ’s-Hertogenbosch. Moreover his way of life was not very prudish: for this he was rebuked twice by the Chapter of the Golden Fleece and among the furniture of his Brussels palace was a bed for fifty persons.

All this makes it very likely that Engelbert commissioned the Garden of Delights triptych for his Brussels palace, which he started to restore from 1481 on. If it should be proven that the triptych is younger than 1504, the possibility remains that Henry III of Nassau was its patron.