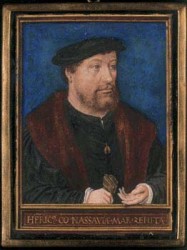 Apart from the military and diplomatic activities of count Henry III of Nassau Gerlach also pays a lot of attention to his interest in art and culture. One of the things he mentions are the contents of Henry’s castle in Breda and court in Brussels. It is very likely that the Brussels court accomodated the Garden of Delights triptych in 1517.

Gerlach also focuses on the links between Henry III and Bosch’s home town ’s-Hertogenbosch. At the same time he also signals a number of links between important noble persons from Henry’s entourage (such as Philip of Burgundy, Margaret of Austria and Diego de Guevara) and Bosch.

According to Gerlach it is not improbable that the Garden of Delights was commissioned by Henry or by his predecessor Engelbert II of Nassau and that it was meant to be a ‘top piece’ in the Brussels secular environment in which the Nassaus felt at home.