The Secret Heresy of Hieronymus Bosch 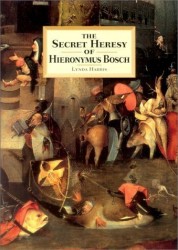 In this monograph the American art historian Lynda Harris defends the thesis that Bosch would have belonged to a secret Cathar sect. According to her Bosch produced works that in the eyes of his (non-initiated) contemporaries and patrons conveyed orthodox Christian messages but that at the same time referred to heretic ideas by means of all kinds of hidden meanings.

The way in which Harris tries to make her thesis acceptable is very questionable from an objective and scientific point of view. There is no historical trace whatsoever of the presence of Cathars in Bosch’s city ’s-Hertogenbosch and furthermore her arguments suffer from a load of methodological errors. Her descriptions of what the paintings show are often wrong, she is guilty of circular reasonings and Hineininterpretierungen and she is not aware of the cultural-historical context (Brabant, around 1500) inside which Bosch created his oeuvre.

The book does contain a number of colour illustrations of good quality, but here the moderate size of the book (24 x 27 cm) is a disadvantage. There are a lot of other books available that introduce the reader to Bosch in an attractive way. Harris’s monograph belongs to the shelf labeled ‘messing around with Bosch’.