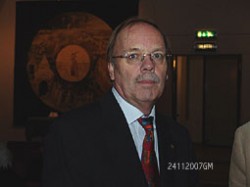 Hoffman focuses on the hypothesis, presented by Jos Koldeweij in 2001, suggesting that the Berlin St John on Patmos and the Madrid St John the Baptist were painted by Bosch around 1490 as the upper wings of the altarpiece for the chapel of the ’s-Hertogenbosch Confraternity of Our Lady. He explains in which way Koldeweij arrived at his hypothesis and then adds nine short comments.

These short comments don’t prove Koldeweij’s hypothesis wrong, but they do make it less probable.