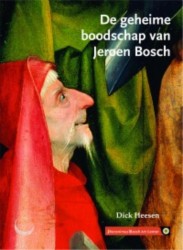 This article is the written version of a speech delivered during the presentation of Dick Heesen’s book De geheime boodschap van Jeroen Bosch [The secret message of Hieronymus Bosch] in the ’s Hertogenbosch Jheronimus Bosch Art Center (JBAC) on November, 15th 2010. According to Nissen Dick Heesen has been looking for biblical backgrounds of many details in the work of Bosch and more than once his approach results in striking insights, but whether the Bible is the only source to decipher the ‘secret message’ of Bosch’s oeuvre remains doubtful. Heesen’s research makes it more than probable that Bosch himself read the Bible in a meticulous way. By analogy with the insights of recent studies of other late-medieval artists we can suppose that the thematical programme on which Bosch’s works are based were designed by himself and not by his patrons or by theologists in their entourage. The Bible was a part of Bosch’s ‘cultural luggage’ but so far it has received little explicit attention, probably because the influence of the Bible on his works was seen as self-evident.

Heesen’s book raises two questions according to Nissen. One: being a layman, was Bosch able to read the complete text of the Bible around 1500? The answer is yes, because at the end of the fifteenth century the Bible was available in the vernacular (and thus for those who could not read Latin), even in printed form. But was a layman like Bosch allowed to study the Bible? The answer is again affirmative. In the Netherlands the study of the Bible by non-initiated believers was strongly encouraged by the devotional movement we now call the Modern Devotion. The Brethren of the Common Life (a subdivision of this movement) even organised some sort of ‘sermon talks’ (discussions in little groups about the Scripture readings of the next Sunday), more than likely also in ’s-Hertogenbosch, and it is not far-fetched that Bosch took part in such discussions.

Two: how does Bosch’s preoccupation with the Bible fit in with the idea of a Church on the decline around 1500? Recent studies have shown that the situation of the Church around 1500 was ambiguous. The ecclesiastical hierarchy did show a number of flaws, but more than ever the faithful wanted to experience their religious feelings as a group, partially in fraternities, and Bosch was a member of such a fraternity. People wanted to meet God directly and without an intermediary, and this was possible by reading the word of God in the Bible. Bosch’s oeuvre is a testimony of that need: Heesen’s book makes it probable that Bosch was able to meet that need – at least partially – by studying the Bible.

In this text Nissen seems to suggest in a polite way that Heesen’s basic thesis (in Bosch’s oeuvre the Bible plays an important role) is somehow stating the obvious. What he does not mention (as can easily be understood because of the context in which the speech was delivered) is that the way in which Heesen works out this thesis is very amateurish and questionable (see also Heesen 2010). Furthermore Nissen sees Bosch as a layman who could not speak Latin, but recent Bosch studies suggest that Bosch was a clerk of a lower order who had enjoyed a Latin education.