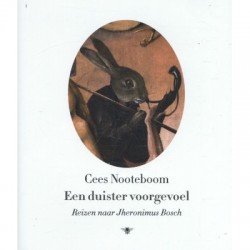 Dutch author Cees Nooteboom was invited by the Prado Museum to participate in a documentary movie (directed by José Luis López-Linares) about Bosch’s Garden of Earthly Delights, on the occasion of the fifth centennial of Bosch’s death. For Nooteboom this invitation functioned as an impetus to visit some cities where Bosch paintings can be admired. In Lisbon he sees the St Anthony triptych, in Madrid (where some footage was shot) he is impressed by The Garden of Earthly Delights and the Adoration of the Magi, in Ghent he visits the St Hieronymus and Carrying of the Cross panels and in Rotterdam he meets with the Prado Haywain (at that moment on loan for an exhibition) and witnesses the restoration of the St Christopher panel.

Nooteboom often talks about himself and the discussion of the paintings (illustrated by means of numerous but rather arbitrary details) is largely limited to (sometimes erreneous*) enumerations of what Bosch painted. Apparently, to the author Bosch’s paintings are mainly ‘riddles without solutions’, which is why interesting art-historical views hardly surface, except maybe for the assertments that Falkenburg’s book (2011) is ‘very learned, academical and sometimes even theological’ [p. 9] and that it confronts the reader with a new word (teratomorphic) [p. 14]. Remarkable personal insights are absent as well, apart from the parallel that is drawn between St Christopher carrying the Christ Child and a Turkish policeman carrying a drowned Syrian refugee child in his arms (2 September 2015). Nicely phrased sentences are also rare, the only exception being in fact: ‘Seldomly a man who has become invisible has left behind so many visible things’ [p. 21].

(*) Some examples: in the central panel of the Lisbon St Anthony triptych the tonsured priest reading a book does not have a pig’s head, the ‘snowy owl’ is a screech owl and Anthony’s left hand does not carry a plate nor does it point in Christ’s direction [p.11]. The ‘mermen with closed helmets’ in The Garden of Earthly Delights are in fact sea-knights [p. 37]. In the Rotterdam St Christopher we do not see a naked child playing on the left bank (it is a naked man on the run for a dragon) [p. 65]. Furthermore, the Ghent Carrying of the Cross is not painted on canvas but on wood [p. 55] and it is highly improbable that Bosch is ‘sure to have known’ the writings of Hadewijch and Ruusbroec [p. 8].