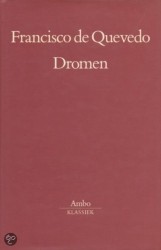 Francisco de Quevedo y Villegas (1580-1645) was a Spanish writer whose satirical texts made him famous. His father belonged to an ancient noble family and his mother was also from noble descent. Both his parents served at the court of the Spanish king. Francisco studied at the university of Alcalá where he became a master in 1600. Then he meets the duke of Osuna, don Pedro Téllez Girón, whose servant and friend he becomes. When he is being accused of conspiracy he ends up in jail but in 1623, he becomes king Philip IV’s secretary, a function he will retain until his death. When he is 54, he marries an elderly noblewoman, doña Esperanza de Mendoza, but he leaves her after three months. In the literature on Quevedo, speculations about his potential homosexuality can be found (he is said to have been the duke of Osuna’s catamite). In 1636, he is arrested and emprisoned for the second time. When he is released in 1643, he retires, probably in Villanueva de los Infantes, where he dies in 1645.

Quevedo was a satirist and a moralist who never shied away from giving his opinion. His work is a continuous memento mori reminding man of the fact that he is a worthless being, doomed to die, and that vanity is improper. This is also the case in his Sueños (Dreams), a collection of five satirical stories published in 1627. This first publication was not authorised by Quevedo himself but it was ratified by the Church. In a later edition (1631) Quevedo adapted a number of things, in order to please the Inquisition: devils were replaced by executioners, God was replaced by Jupiter, the Holy Virgin by Vesta etcetera.

In the El Alguacil Endemoniado story Hieronymus Bosch is literally mentioned in one short passage, when the devil is complaining about the way in which he and his companions are usually being depicted. These are the sentences: But now for something different. I must say that each time you depict us, you make a mess of it; with claws although we are not eagles, with tails whereas there are devils with no tail, with horns whereas we are not married, and always with a shabby little beard, although there are devils among us who could be hermits and judges. Remedy this state of affairs. For a little while ago Hieronymus Bosch [Jerónimo Bosco] was here and when asked why he had made such a hotch-potch of us in his dreams [sueños], he replied: because I had never believed that devils were real [for the original Spanish, see Vázquez Dueñas 2016: 89].

In Quevedo’s own times and in the specialised literature, this passage has caught quite some attention, particularly in Spain, and has raised the question whether Quevedo considered Bosch an atheist, but a satisfactory answer has never been given. The only firm conclusion that can be drawn from the passage quoted above, is that Quevedo knew about the Bosch oeuvre, but further the reference to Bosch seems to be not much more than a witty remark. More than one author has also raised the question whether Quevedo’s Sueños were influenced by Bosch’s paintings. Triptychs such as the Haywain and the Garden of Earthly Delights do share a common trait with the Sueños: they are moralising and satirical criticisms on man’s sins and follies, but that’s where the comparison ends. Taking into account that we are dealing with different art forms (painting / literature) and also the fact that many of Quevedo’s linguistic puns are lost in a translation, the Sueños never seem to come near to Bosch’s pictorial genius. Whereas Bosch still succeeds in fascinating the viewer, the Sueños and their rather arbitrary and always repeated catalogues of sins and vices get tedious after a while. Quevedo’s dreams obviously lack the coherence and artistic creativity that can be found in Bosch’s hellscapes. For that reason, it may duly be noted that Quevedo has never reached the status of a writer of world literature (for example, who in Belgium or The Netherlands has read one of his works?), whereas Bosch is known and praised worldwide.