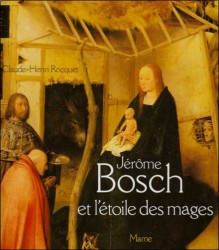 Claude-Henri Rocquet is a French docteur en esthétique and also a poet and a playwright. The latter is probably responsible for the woolliness and pseudo-poetical vagueness that characterize a large part of this text. Every now and then Rocquet also writes more factual things about Bosch’s Adoration of the Magi triptych (Madrid, Prado) and sometimes these are correct, sometimes they are less correct or hypothetical. But extensive and reliable scholarly arguments don’t show up anywhere.

According to Rocquet Bosch painted this triptych when he was about 60 years old, around 1510 [pp. 16/34] (thanks to recent research we know that the triptych was painted around 1495). The commissioners were Peter Bronckhorst and Agnes Bosschuyse [p. 16] (an outdated and wrong fact). The exterior panels, painted in grisaille, show two other donors, strikingly painted in colour: an old man (Peter’s or Agnes’s father?) and a child that looks like Peter [p. 25]. The Adoration of the Magi in the central panel is a prefiguration of the celebration of mass, the genuineness of which is demonstrated in the exterior panels by means of a Mass of St. Gregory and Passion scenes [pp. 20/39]. Bosch’s sources were probably miniatures, processions and theatrical performances [pp. 27/38/63].

The city that can be seen in the background of the central panel is Jerusalem [pp. 73/94] (and not Bethlehem, as might duly be expected). The three Magi in the central panel are interpreted by Rocquet as Christian converts whose different ages represent different stages of conversion [pp. 105-106]. The donkey in the stable is seen in a positive way as the donkey of the Flight to Egypt [p. 97] but the open side of the stable is related to the gates of Hell [p. 119], the reason for this being the so-called Fourth King who is standing there.

This Fourth King, whose face is a bit too red according to Rocquet (actually the face and neck of this figure are deeply red and seem heavily burnt) was interpreted as the Antichrist by Lotte Brand Philip in 1953. Rocquet’s own interpretation of this figure is very confusing. First he suggests that the Fourth King is Satan [p. 93-95], then that he is the Antichrist and he also presents a new (but not very convincing) hypothesis: the figure with the red face could be the Old Testament prophet Balaam [pp. 97-100]. Rocquet himself calls this hypothesis ‘fragile’ and ‘unverifiable’ [p. 107] and keeps oscillating between the Antichrist, Satan and Balaam [pp. 110/119]. Because in the Book of Revelations and also elsewhere in the Bible Satan/Lucifer is compared to the morning star, Rocquet thinks the so-called Fourth King in the stable is opposed to the star of the Three Magi, which is shining at the top of the central panel.

Bosch’s Adoration of the Magi triptych obviously deserves a more clarifying approach than is being offered in this monograph. A benefit of this publication are the high-quality colour illustrations showing numerous details of the painting (made by Giovanni Dagli Orti).