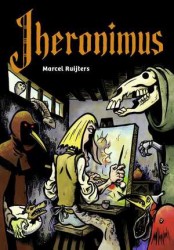 In earlier graphic novels such as Sine Qua Non (2005), 1348 (2010) and Alle Heiligen (2013) the Dutch comic writer Marcel Ruijters (born in Tegelen, 1966) already showed his interest in the Middle Ages, an interest that is also reflected by his somewhat ‘primitive’ and grotesque but at the same time very typical drawing style, with thick lines that remind the reader of medieval woodcuts. In 2008 Inferno (inspired by Dante’s Divine Comedy) was awarded the prize for best Dutch graphic novel. In 2015 Ruijters was awarded the Stripschap-prize for his complete oeuvre. In 2011 the Foundation Bosch500 asked Ruijters to produce a drawn biography of Hieronymus Bosch. This graphic novel was published in Dutch, English and Danish in September 2015, followed by translations in other languages as well.

Ruijters has come up with a story that tries to meet art-historical standards (see the ‘historical information’ at the end of the book) but because we ignore a lot of biographical data concerning Bosch he had to invent a number of things himself. Those readers who are somewhat familiar with the art of Bosch will recognize quite a a lot and will also enjoy exploring the border between fact and fiction.

At the beginning of part 1 (The Lord’s dogs) Anthonis van Aken has died a year before and his sons Goessen, Jheronimus and Jan have inherited their father’s workshop, in which Goessen’s wife Katelijn is active as well. One of their paintings (an Ecce Homo) is rejected by the Dominican friars and Jheronimus meets architect Allart Duhameel.

In the second part (The wood has ears) Jheronimus is reminded of the great fire of 1463 and thanks to Duhameel Engelbrecht II commissions the workshop to paint the Garden of Delights (‘a large triptych focusing on the omnipresent sin of unchastity’). But first they take care of another commission (the Brussels Crucifixion). In a nearby monastery a monk allows Jheronimus to study miniatures. Conversations in an inn inspire Jheronimus to paint certain details in the Garden.

In part 3 (Justice) Jheronimus’ purse is stolen while he is watching the tricks of a juggler. At the Market in front of his house a quack-dentist is at work. When he leaves the city this quack is robbed and killed by two scoundrels who later get involved in a fatal knifing in an inn. They are both executed in a cruel manner.

In part 4 (The Big Journey) Jheronimus and Duhameel are leaving ’s-Hertogenbosch for Flanders but after the first night Jheronimus goes back home because he is worried about his wife Aleid.

In part 5 (Big fish eat the small ones) the city council of ’s-Hertogenbosch is worried by the growing number of beggars. The year 1500 is drawing near, Jheronimus’ brother Goessen has died and Jheronimus now has his own workshop with numerous assistants (including Jan and Anthonis, Goessen’s sons). Jheronimus and Jan pay a visit to a St Anthony hospital where lunatics and ill people are being treated. There is a rebellion of the poor but this is struck down with a lot of bloodshedding.

In the sixth part (A.D. 1516) Aleid has a nightmare in which Jheronimus is visited by the Grim Reaper who has made a mistake (he had to fetch nephew Anthonis van Aken, not Jheronimus van Aken). The Grim Reaper leaves but forgets his arrow. Jheronimus runs after him and so does Aleid somewhat later. She meets a series of monsters and asks them whether they have seen her husband. When she wakes up, Jheronimus is lying in bed next to her. Dead?

‘Ruijters describes his hero in a light-footed way, the circumspect and worrisome Bosch who is critical about his fellow-citizens and sadly observes the degeneration of his native town. He abhors the thoughtless violence around him’, Ron Rijghard observes in his review in NRC Handelsblad. The Dutch and international specialist press received Jheronimus in a very fabourable way.