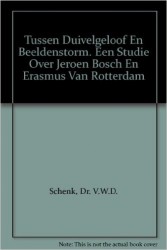 In this book the Dutch psychiatrist Victor Schenk attempts to offer a psychological portrait of Hieronymus Bosch. According to Schenk there is little doubt that Bosch himself did not believe in his devils and that he was a sarcastic mocker. He then applies Kretschmer’s typology to the (supposed) Bosch-portrait in the Recueil d’Arras and concludes that Bosch had a ‘pycnik, endomorphic physique with an asthenic streak’.

Although Schenk himself warns that we have to be very cautious when drawing conclusions from these scarce data, he asserts that Hieronymus must have been a melancholy, somewhat sarcastic person with manic traits now and then and often suffering from obsessional neurosis. Bosch was deeply religious, felt an urge to moralize and was strongly aware of man’s sinfulness. Schenk also stresses the fact that Bosch was definitely not psychotic.