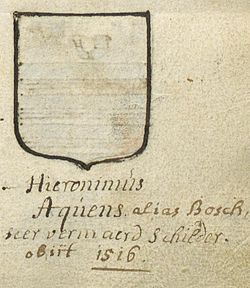 Loes Scholten announces the launching of BoschDoc: an online database bringing together all archival sources regarding Bosch between 1350 and 1800. The database has documents from the ’s-Hertogenbosch archives (the aldermen’s protocol, the municipal accounts, archives of almshouses), old inventories, travel journals and art-historical texts. Each source is represented by a reproduction, a transcription and a Dutch and English (later also Spanish) translation. Further information about context and interpretation is also provided and there are references to publications about each particular source.

It will be important to deal with these sources in a critical way in order to avoid speculation and to correct mistakes in earlier publications. Two examples: the archival sources don’t tell us that Bosch had a workshop in his own house (Markt 61) and the maid of Aleid (Bosch’s widow) who is mentioned in 1521/22 was not called Metken but Meriken.