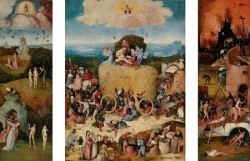 The haywain in the central panel of the Haywain triptych (Madrid, Prado) looks like a float from a Carnival parade and is an allegorical allusion to the richess everyone is craving for. The highplaced figures on horseback who are following the haywain are (from left to right) the French king Charles VIII, pope Alexander VI, Maximilian of Austria and the German emperor Frederik III. Because Frederik III had already died in 1494 and Alexander VI had not yet become a pope in 1492 the triptych must have been painted in 1493. The woman and the lute-player sitting on top of the haywain are Margaret of Austria and her brother Philip the Fair (Maximilian of Austria and Mary of Burgundy’s children). The scene is said to allude to the return of the 13-year-old Margaret from France in March 1493, when the deal regarding her future marriage to the French king was cancelled. The vagabond in the exterior panels is a shepherd and represents Charles the Bold (Philip and Margaret’s grandfather), here depicted as the Biblical king David. Although earthly wealth leads to hell, the haywain with Philip and Margaret and the figure in the exterior panels are heading towards an Underground World (Monde Souterrain).

It will be obvious that this little book should not be taken too seriously. No wonder the author is hiding behind a pseudonym. I would like to thank Bernard Vermet who made this book available to me.