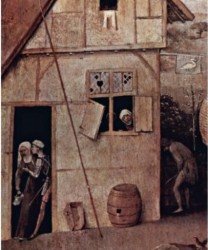 According to Van Baaren the swan motif appears six times in the works of Hieronymus Bosch. In the Wedding at Cana (Rotterdam) a swan is carrying the sign of the crescent moon: this may refer to the Holy Virgin or to Venus. This latter symbolism fits in better with the context: the swan would then be a symbol of unchristian lechery. In the St. Anthony triptych (Lisbon) the swan is an unclean bird which belongs to a context of idolatry. In the Adoration of the Magi triptych (Madrid), the Rotterdam Vagabond tondo and the Madrid St. Anthony panel (a painting by a Bosch follower) the signboard of a brothel carries a swan. Bax has already pointed out that the Middle Dutch word swaentje (little swan) could mean ‘prostitute’. In the left interior panel of the Garden of Delights (Madrid) the swan is probably only part of the natural decor.

Van Baaren concludes that with Bosch the swan usually has negative connotations, whereas the Fraternity of Our Lady, to which Bosch belonged, was also called ‘Fraternity of the Swan’. Didn’t Bosch feel at ease in this company? The available sources give the impression that the Fraternity held Bosch’s artistic skills in low esteem. Bosch, not feeling okay with this, would therefore have expressed his discontent by painting swans in a negative context.