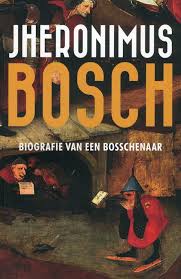 Because the things that we know for certain about the life of Jheronimus Bosch are quite rare, it is somewhat surprising that someone is capable of writing a biography of 382 pages about this late medieval painter. Obviously, the word ‘biography’ in the title has to be taken with a pinch of salt. Closer to the truth is that this book is an attempt to situate Bosch broadly within the culture of his times and environment. Weidemann does this in 34 chapters, preceded by a prologue.

Unfortunately, this prologue does not make a very good impression. It has quite a lot of obscure sentences and superficial, often pointless statements. An example of this is the following (I translate from the Dutch): ‘Jheronimus Bosch was born at the right spot and at the right time. The Reformation upset the whole world, because it became clear that the world was not only a stage’ [p. 14]. Another example: ‘He [Bosch] created scenes in which there was a lot to see, with a lot of frivolities and exaggerations, which he used to arouse curiosity and certain other feelings as a déjà vu’ [p. 15]. And another one: ‘He was somebody who was obsessed by getting a grip on the unintelligible moment between birth and death’ [p. 16]. Furthermore, when on page 15 we read that a ‘wonderful cathedral’ was built in ’s-Hertogenbosch during Bosch’s lifetime (the St John’s was a church and became a cathedral during the second half of the sixteenth century), and that two giant ears ‘are separated from each other’ by a knife in the right interior panel of the Garden of Delights, this does not really sound promising (to put it mildly) for what is going to follow.

The 34 chapters of the actual text offer quite a lot of correct information, but new insights or formerly unknown things should not be expected. Of course, in itself this is not bad, but more than once the book also offers highly subjective and historically unaccounted for information, which leads to the question whether this is okay for a biography that wants to be taken seriously from a scholarly point of view. I give some examples of this (again translating from the Dutch).

Furthermore, the reader is often (too often, in fact) confronted with obscure sentences which are hard to understand, as was also the case in the prologue. Because the text has quite a lot of linguistic errors, in some (but definitely not all) cases this could be due to the fact that the text was translated from German. A few examples.

Simply wrong are the following statements.

Bottom line: Jheronimus Bosch – Biografie van een Bosschenaar offers the reader a number of correct facts, collected from here and there, but also mixed together clumsily (incoherently) and sometimes erroneously, and showered with a lot of fantasy. As a ‘biography’, this book is highly untrustworthy.