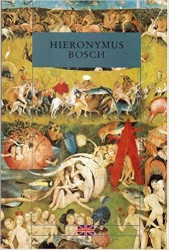 A thin booklet, actually more of a leaflet, that attempts to offer a general impression of the works of Bosch. The author signals that half of Bosch’s paintings represent Christian subjects, particularly the Passion and the lives of the saints [p. 4]. Bosch is seen as a Christian moralist [p. 26]. Otherwise this text is very superficial and makes a very insecure impression, especially when it deals with submotifs. Regarding the crowned figure in the stable in the central panel of the Madrid Adoration of the Magi for example it is signalled that this person is either Herod or the Antichrist or a prophet [p. 6].

There are also a lot of inaccuracies in the text. Fraenger is reported to have said (in the nineteenth century!) that Bosch can be related to Freemasonry [p. 24]. Bosch’s paintings are painted on canvas [p. 26]. The author understands very little about the cultural-historical context of Bosch, which is clearly proven by passages like these: ‘He was said to have been born in the Flemish locality of Hertogenbosch where he lived for many years. He is now thought to have come from Bois-le-Duc in Holland’ [p. 30]. Apparently the author does not realize that ’s-Hertogenbosch and Bois-le-Duc are the same town…

The English version we read also has numerous aggravating translation errors. The Garden of Delights is said to have been painted from 1500 till 1510 [p. 10]. The central panel of the Haywain triptich is supposedly based on the proverb ‘the world is a hay wagon and you take whatever you can from it’ (hay wagon should be haystack). The book does offer a number of nice and clear colour illustrations of details.